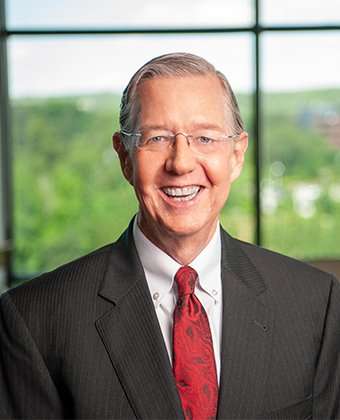 Intro: During his 40-year career, James has been, first and foremost, a trial lawyer. He has tried over 200 jury trials to a verdict, including trials in state and federal courts in 12 different states. He obtained the largest verdict in the history of the Federal Employers Liability Act (FELA) ($34,000,000). He also obtained what was, at the time, the largest medical malpractice settlement in Tennessee history ($6.2 million). Among his victories are multi-million dollar jury verdicts on behalf of clients from Alabama, Georgia, South Carolina, Tennessee, West Virginia, and Kentucky. His cases and verdicts have been featured in the Atlanta Constitution/Journal, the Birmingham News, the Cincinnati Post, the Louisville Courier-Journal, the Macon Telegraph, the Florence Times, and the Birmingham Business Journal. His work on behalf of railroad workers injured by toxic chemicals was covered by National Public Radio as well as the subject of a four-part series by the Louisville Courier-Journal.

Background: After graduating from Auburn University with a degree in economics, James attended the University of Alabama School of Law. He distinguished himself by being the Student Work Editor of the Alabama Law Review, a member of the winning team in the John Campbell Moot Court competition, and being inducted into the Bench and Bar Legal Honor Society.

James’ “Why”: James finds pride and honor in earning the respect and friendship of the thousands of clients he has represented.

Just For Fun: James has been married to his wife Joan for over 35 years. Everyone agrees that she is way too pretty for him. They have a daughter, two dogs, and a cat. During his spare time, James is an avid tennis player. But, his real passion is flying. He has been a pilot for 40+ years and has accumulated over 2500 hours as a pilot. In the past, he has owned and flown a Beechcraft Bonanza, a Piper Lance, and a Piper Saratoga II TC. He currently flies a Piper Navajo. His planes have allowed him to handle cases throughout the Southeast while still being, at least according to him, a great father and a good husband.