Crash Course: What is a Rear End Accident and Why do they Happen? 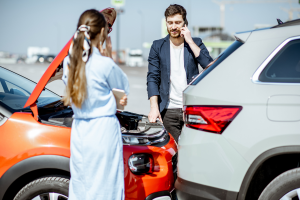 To begin, let us define the phrase "rear-end."

A rear-end accident happens when the front end of one vehicle collides with the back end of another vehicle in the context of an automobile accident. This sort of collision occurs when one driver follows too closely behind another vehicle and does not have enough time to react and stop before colliding with the vehicle in front of them.

But why are rear-end accidents so common?

Distracted driving is a frequent reason. When a motorist is not paying attention to the road and traffic conditions, he or she may not notice that the vehicle in front of them has slowed or stopped. Texting while driving, fiddling with the radio, or simply daydreaming are all examples of distracted driving.

Rear-end collisions may also be caused by the practice of "tailgating," in which one driver follows the vehicle in front of them excessively closely. This hampers the driver's ability to react rapidly in the event that the car in front of them suddenly comes to a halt or slows down. On the highway, when speed is faster and stopping distance is greater, this is very dangerous.

Rear-end accidents may also occur when the road is slippery from rain or snow, making it more difficult for a vehicle to stop in time. The state of the vehicle, such as worn brakes or old tires, might also have an impact.

Rear-end crashes may result in minor to serious injuries. They often induce whiplash, a neck injury that may cause pain and stiffness. A rear-end collision may result in more catastrophic injuries such as shattered bones, spinal cord damage, and even death in extreme situations.

So, now that you understand a little bit more about rear-end collisions, it's critical to practice defensive driving in order to prevent getting involved in one. Maintain a safe distance, stay aware of your surroundings, and pay close attention to road and traffic conditions. With the correct information and precautions, you may greatly lessen your chances of being involved in a rear-end collision.

NEGLIGENCE and rear-end accident: WHAT IT MEANS & HOW IT’S DETERMINED

The term negligence will be thrown around a lot when discussing who’s at fault for a rear-end accident. When you drive on the road, you undertake the basic duty to drive safely and follow all traffic laws. Negligence is when one or more of the parties involved in the accident fails to follow through with that duty. If negligence is determined in an accident, the negligent party will most likely be at fault.

Determining negligence will vary based on the state you are in. Some states have contributory negligence standards, but most have comparative negligence laws in place. It’s important for you to have an experienced car accident attorney to make sure that negligence is determined lawfully for your particular case.

In most states, drivers are required to always keep a reasonable distance from the car immediately in front of them. Some states set a specific distance, some don’t. It’s up to the driver to pay attention to their surroundings, the cars around them, and any other traffic conditions that may be affecting the distance between their car and the one in front of them. If a driver is neglecting to keep a safe distance or is “tailgating” the other car, and the other driver is following all traffic laws and not being negligent behind the wheel, the tailgating driver will be held liable for the accident.

Being a safe driver also entails signaling to other cars when you are planning on making a turn. This required signaling distance, too, depends on the state you are driving in, but a safe bet is somewhere around 200 feet. If a driver fails to signal, makes a sudden stop or turn, and is then rear-ended, they will most likely be at fault in the accident. However, if the second car was following too closely behind and the first car driver failed to signal in time, both parties will be at fault for the rear-end accident.

When you’ve been involved in any kind of a car crash that was caused by another party, you are entitled to make a claim for monetary compensation for your damages. The car accident attorneys at Wettermark Keith have a long history of success in bringing in high-value damage awards, with a 95 percent win rate and more than $750 million obtained for clients since 2003. Call us today to schedule a free review of your case.

What are the most prevalent causes of rear-end accidents? Collapse

Yes, rear-end collisions may result in catastrophic injuries such as whiplash, shattered bones, spinal cord injury, and even death.

How can I lower my chances of getting involved in a rear-end collision? Expand

You may reduce the likelihood of being in a rear-end accident by maintaining a safe following distance, paying attention, and being aware of the vehicle in front of you and your surroundings, as well as the road and traffic conditions.

Who is at responsibility in a rear-end crash? Expand

In most cases, the motorist who rear-ends another car is held responsible since they failed to maintain a reasonable following distance and failed to respond in time to prevent the incident. However, in rare situations, the motorist who was struck from behind may also be deemed to be at blame if he or she brakes unexpectedly and without signaling.